“You cannot go wrong when you are born in Paris” 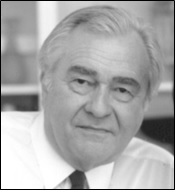 Dr. Ruediger (Ruedi) Thalmann passed away Saturday, August 25, 2018 with his wife of 51 years and fellow ARO member, Dr. Isolde (Ici) Thalmann, by his side.  We have lost a remarkable scientist, an enthusiastic collaborator and wonderful colleague.  Ruedi joined the Department of Otolaryngology at Washington University School of Medicine in 1963.  He remained an extremely active faculty member, becoming Professor Emeritus of Otolaryngology and Lecturer in 1992.  He retired from his work at Washington University at the age of 82.   Over the years he has carried out research (basic and clinically-oriented) on the auditory and vestibular system, ranging from human to zebrafish. His research was almost exclusively NIH-supported, where he functioned in practically every position, from PI to Co-I to collaborator to consultant, to member of the Study Section.  Through his contribution to ear research, he was honored with the Award of Merit from the Association for Research in Otolaryngology in 1996.  Dr. Thalmann was a member of the prestigious Collegium Oto-Rhino-Laryngologicum Amicitiae Sacrum.

Modified from the Department of Otolarynology, Washington University, 9/6/2018.

Ruediger’s motto always was ‘I do it my way’ and he died on his own terms, surrounded by his wife Ici, a circle of dear friends, and his dog Manuela. Ruediger was born in Paris, and he always said that ‘you cannot go wrong when you are born in Paris’. This did not always come true. During World War II, as a teenager, he had to leave a very happy and comfortable life, having grown up in Marburg, Slovenia and, as an Austrian citizen, resettled in Styria, Austria. He followed in the footsteps of his grandfather, a surgeon, and his father, an otolaryngologist, studied medicine in Graz and Vienna and became a board-certified otolaryngologist. His keen intellect, curiosity and ambition lead him to emigrate to the United States. He became a faculty member at Washington University in St. Louis, Missouri. There he met his wife Isolde, and together they became internationally known pioneers of cochlear and vestibular biochemistry. While Isolde retired at age 65 and followed her passion – dancing – and built the Dancing in the Desert Studio in Abiquiu, New Mexico, Ruediger continued his research at Washington University, changing his field from auditory biochemistry to vestibular biophysics. At age 85, arguably the oldest researcher who worked under the auspices of an NIH grant, he decided to retire. Ruediger touched many lives as a mentor to fellows from every continent.  He was a unique man, a quintessential Renaissance man. He took part in the van Cliburn ‘Outstanding Amateur Pianist Competition’, and Ballroom dance competitions; his home became the gathering place for artists; music lovers enjoyed many ‘Hauskonzerts’ by renowned musicians; he was an avid and knowledgeable art collector. He also had a strong social conscience, and a commitment to help others through action and philanthropy. As he requested, a private service to celebrate his life (of course with music) was held in December of 2018 with the renowned Arianna String Quartet playing Schubert’s “Death and the Maiden” quartet.