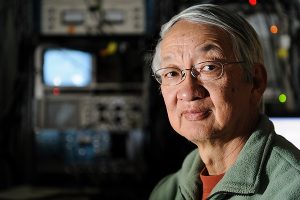 Tom Chi Tien Yin was born in Kunming, China where his parents had fled to escape the Japanese invasion of northern China before World War II. In 1948 the family emigrated to the US and settled in Denver, CO where his parents were graduate students. When the Communists defeated the Nationalists in China in 1949, the family decided not to return to China. Tom attended public schools in Denver and Aurora, CO and then went to Princeton University, graduating with a major in Electrical Engineering. He then went to graduate school in the same field at the University of Michigan.

After a semester or two in Ann Arbor, he discovered that practically all the research in the Electrical Engineering Department was war-related and sponsored by the Department of Defense during this time of the Vietnam War. Not wanting to support the war effort, he decided to complete the course requirements for a Master’s degree and then join the Peace Corps. However, just before he was to go for Peace Corps training, by chance in the hallway he met Professor William J. Williams who told him that his lab was funded by NIH, not by DOD.

Tom queried, “That sounds nice. What do you do?”

At that pivotal moment, Tom put the Peace Corps on hold and decided to explore this new field. Essentially, Williams’ lab applied engineering techniques and analysis to the study of the ultimate communication system, the brain. The next semester, as a third year graduate student, Tom found himself trying to shore up his meager 9th grade Biology background in a large introductory Biology course surrounded by hundreds of pre-medical freshmen students. Tom’s thesis was a study of the transfer characteristics of neurons in the thalamus relaying information about joint angle. The classic work in this system was by Vernon Mountcastle of Johns Hopkins University so Tom arranged to do a post-doc in his lab following a conversation at the first meeting of the Society for Neuroscience. Before his funding for the post-doc at JHU could start, Tom had a six-month gap so he decided to fill that time with a short post-doc at the SUNY at Buffalo in the laboratory of Nobel laureate Sir John Eccles. Since Tom’s parents had moved to Buffalo by this time, he could stay with them while working on an ‘electroanatomy’ experiment studying cerebral inputs to the cerebellum, which proved to be surprisingly fortuitous when he was looking for a faculty position. At JHU Tom studied the visuomotor properties of neurons in the posterior parietal cortex of an awake, behaving monkey, which underscored an interest in behavior for the rest of his career.

In 1977 Tom was recruited to join the Department of Neurophysiology at the University of Wisconsin with the requirement to teach motor systems. With his background in cerebellar research, he qualified. During his first year in Madison while waiting for his NIH grant to be funded, he teamed up with Shigeyuki Kuwada who was a post-doc with Jerzy Rose to study the binaural response properties of cells in the inferior colliculus. Neither Shig nor Tom had previous experience in auditory physiology but there was excellent local expertise in the Department in Madison. This was the start of a career-changing interest in the auditory system and a life-long friendship and collaboration with Shig. While Tom continued his visuomotor experiments after Shig left, the lure of the fascinating cells sensitive to microsecond differences in timing of inputs to the two ears was irresistible and his research efforts eventually focused on the lower auditory brainstem from the auditory nerve, cochlear nucleus, inferior colliculus and superior colliculus. These experiments combined intra- and extracellular recordings along with injections of intracellular markers to study relevant physiological responses and important circuitry properties of the auditory brainstem pathways using state-of-the-art digital acoustic stimuli.

In addition to experiments addressing circuitry issues, Tom’s lab also embarked on a systematic study of sound localization behavior of cats with the goal of linking neurophysiological responses to behavior. Cats were trained on a sound localization task to direct their gaze at sound sources using operant training. In addition to several studies quantifying the psychophysics of sound localization, Tom and his colleagues also correlated neurophysiological responses in the inferior colliculus while the cat was experiencing the precedence effect, one of the first studies in the auditory system to correlate physiology with behavior in a behaving animal..

An important factor in Tom’s research success was the cohort of exceptional students, post-docs, sabbatical faculty, and technicians that he worked with in Madison over the years. He is indebted to the hard work and brilliance of Laurel Carney, Joseph Chan, Micheal Dent, Bertrand Delgutte, Yan Gai,  Melissa Greenwood, Judith Hirsch, Dexter Irvine, Amy Jones, Philip Joris, Shig Kuwada, Ruth Litovsky, Liz McClaine, Jordan Moore, Luis Populin, Janet Ruhland, Phil Smith and Dan Tollin. In addition the faculty and staff of the Department provided invaluable advice, counsel and assistance on matters ranging from the details of earphone calibration, histological preparation of brain tissue, computer programming, construction of laboratory equipment, to the preparation of grant applications. Over his 39-year tenure, Tom’s research was funded without interruption and on the first submission from NIH, usually with two grants. He also served as a permanent member on three different NIH study sections as well as chairing and participating in numerous NIH site visits. He was the inaugural awardee of the William and Christine Hartmann Prize in Auditory Neuroscience from the Acoustical Society of America in 2013.

Throughout Tom’s professional stint as a professor at the University of Wisconsin, he has been deeply engaged in teaching, initially motor systems to first-year medical students and then transitioning to graduate and undergraduate students.  After 20 years of teaching medical students, Tom teamed up with Professor Richard Keesey of the Department of Psychology in 1997 to start an introductory systems neuroscience course for undergraduates. It is unusual for faculty in the Medical School to be involved in undergraduate teaching and this was done on top of his normal teaching requirements. Over the years this course became quite popular with enrollments of almost 200 students and it became the backbone of a new undergraduate major in neurobiology. After Prof. Keesey retired in 2001, Tom taught the whole course with the assistance of a TA or two for whom the course provided a training forum for teaching. Tom believed that science education at all levels was important and led numerous community outreach visits to local elementary and junior high schools where cow eye dissections were always a hit. In 2003 he received the Chancellor’s Distinguished Teaching Award in a campus-wide competition.

In addition to research and teaching, Tom has also had major administrative roles.  In 2006 he was elected to be Director of the campus-wide Neuroscience Training Program, which is the graduate program at the Univ. of Wisconsin, supporting about 70 graduate students working with 120 faculty members. He wrote two successful training grant renewal applications for the program. In 2004 he wrote a new T90 training grant for Clinical Neuroengineering and directed the program for the first 5 years. In 2011 the Medical School realigned the departments of Anatomy, Physiology and Pharmacology into a newly established Department of Neuroscience, for which Tom was the first chair and directed the successful promotion of 5 faculty members and the move of the departmental faculty to a new building.

To students just starting on a research path, it is noteworthy that the arc of Tom’s career was quite untraditional, as he was fortunate to experience several serendipitous events. Changing to a completely different research area in the middle of graduate school after a chance encounter in the hallway, doing a short post-doc on the cerebellum to facilitate finding a faculty job teaching motor systems, and pairing up with Shig Kuwada to start research on the auditory system were all certainly unplanned.  The important aspect is to be prepared to take advantage of good luck.

In retirement Tom has continued to teach graduate students, but he has much more time now to enjoy his marriage of 48 years to Lillian Tong, two marvelous children, Eric and Laura, and three wonderful grandkids. His major hobby is photography with particular interest in nature, wildlife, and travel. He enjoys visiting new places and hiking to areas to see wildlife  in their natural setting. He has a travel/photo blog of trips on www.neurotraveler.com and a photo site on Flickr which can be seen at https://www.flickr.com/gp/tctyin/54BL24.