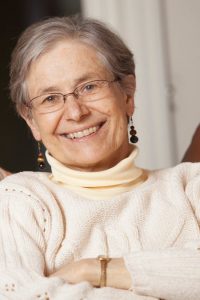 Our dear friend and colleague, Donata Oertel Sugden, PhD, passed away on April 22, 2020 from cancer. She was at home surrounded by her loving family.

Donata was a world renowned auditory neuroscientist whose discoveries of the role of cells in the cochlear nucleus will forever imprint our thinking about the neurophysiological basis of auditory function. She spent her career of 38 years at the University of Wisconsin-Madison, where she was until very recently Chair of the Neuroscience department. Donata was known to many members of ARO for the several decades that she was active in the association. Most notably, she was president of ARO in 2003, and Award of Merit recipient in 2004. She was a gentle, kind and brilliant woman. Her energy and enthusiasm were infectious and she was a role model for women scientists.

For over 30 years Donata Oertel was the guiding light of neuroscience at the University of Wisconsin in Madison and contributed much to the university as a research scientist, a teacher and departmental chair. She received her undergraduate training at UC-Los Angeles and her Ph.D. in Biological Sciences from the UC-Santa Barbara. After post-doctoral research with Ching Kung in Madison, and with Ann Stuart at Harvard, she was appointed Assistant Professor of Neurophysiology at the University of Wisconsin-Madison in 1981 and was promoted to full Professor in 1992.

Donata Oertel began her independent research in 1981 as a new faculty member. After collaborating with Bill Rhode and Phil Smith to characterize the sound responses of neurons in the first relay station in the brain, the cochlear nuclear complex, in anesthetized cats, Dr. Oertel made the significant experimental leap of studying the nucleus using in vitro brain slices. At that time, not a lot was known about this nucleus because of its inaccessibility in the brain stem. In slices, neurons could be recorded and marked anatomically, and function could be explored with pharmacological tools. Use of the mammalian brain slice was a novel methodology in the 1980’s, but its application was restricted to a few brain regions such as the hippocampus, since other regions proved less amenable to long-term survival in vitro. So it was a major step to develop a brainstem slice preparation and excite neurons synaptically by stimulating the stump of the auditory nerve input. Introducing the cochlear nucleus brain slice enabled her to address a broad range of important questions about synaptic circuit mechanisms in sound processing. The premise was that to understand how auditory information is processed in the cochlear nuclei, it is crucial to know what circuitry exists and how it functions.

Her inaugural paper on the slice preparation (Oertel 1983) is a classic in the Journal of Neuroscience. It reveals a series of ultra-fast electrical responses that encode the key features of timing of auditory signals that must be key properties in sound localization. She was able to morphologically distinguish different cell types (bushy, stellate and octopus cells) with different firing patterns (Wu & Oertel 1984), and to record from the ventral cochlear nucleus (VCN) and the dorsal cochlear nucleus (DCN) (Hirsch & Oertel 1988; Zhang & Oertel 1993), regions of the early auditory pathway having distinct properties and physiological functions. Important findings include: (i) the delayed, frequency-specific inhibition from the DCN back to neurons in the VCN with properties suggesting it mediates suppression of echoes (Wickesberg & Oertel 1990); (ii) characterization of VCN octopus cells, that can detect with great precision coincident firing of auditory nerve inputs (Golding et al 1995; Ferragamo & Oertel 2002), and compensate for variable frequency-dependent delays in the cochlear traveling wave (McGinley et al 2012); (iii) the unusually fast kinetics of both voltage-dependent ion channels (Oertel 1997) and glutamate-receptor channels (Gardner et al 2001) that may be optimized for fast auditory signaling; (iv) demonstrating that multimodal sensory inputs on the dendrites of DCN fusiform cells were subject to long-term potentiation but that auditory inputs were not (Fujino & Oertel 2003). This multi-sensory convergence may compensate for head and pinna orientation during the sound localization process (Oertel & Young 2004). Work with her long-term collaborator Larry Trussell showed that long-term potentiation and depression, in the form of spike-timing dependent plasticity, were exhibited in the fusiform and cartwheel neurons of the DCN (Tzounopoulos et al. 2004); (v) the crucial roles of two membrane ion channels, the low-voltage activated K+ channel, Kv1.1 and hyperpolarization-activated cation channel, HCN1, which are co-regulated to set the neuronal resting potential. HCN1 in particular may be part of a process to detect gaps between acoustic stimuli (Cao & Oertel 2011; 2017; Oertel et al., 2020).

Donata Oertel always attempted to employ novel experimental approaches. One recent example was exploiting a mutation of receptor guanyl cyclase to understand the topographic organization of the auditory nerve input to the VCN (Lu et al 2014). Other examples include the involvement of nitric oxide signaling in potentiation between stellate cells tuned to the same frequency (Oertel & Cao 2017); and using an optogenetic technique, a hybrid voltage sensor, to explore synaptic connections between neurons excited with a pure tone (Lin et al 2018). Her work has touched on many features of neural signaling: optimizing response speed with fast glutamate receptors and voltage-dependent ion channels; long-term synaptic modification; differential sustained or transient firing patterns; dendritic integration and coincidence detection. Over the last 39 years, Donata Oertel has produced a body of work representing major advances in our understanding of how the brain processes and interprets sound. She was president of the Association for Research in Otolaryngology in 2002 and received the ARO Award of Merit in 2004. She served as a member of the NIDCD council (2003-2007) and was a member of the Board of Scientific Counselors, NIDCD (2011-2017). She delivered a plenary lecture at the Society for Neuroscience annual meeting in 2012.

Besides her research, Donata was a consummate teacher who contributed in no fewer than 18 disparate courses at UW Madison. She delivered lectures to a wide array of undergraduate, graduate and medical students covering an extraordinary range of subjects, ranging from brainstem auditory nuclei to the biophysical role of dendrites, from prions to brain cancers. She was kind and generous and always managed to pitch the lecture at a level appropriate for her audience. Donata also served in a number of administrative roles, and weathered challenging periods during departmental reorganizations and mergers. She served as chair of the Department of Neurophysiology, interim chair of the Department of Physiology and most recently as chair of the newly formed Department of Neuroscience, a position she occupied from 2014 until her death in spring 2020.

Donata is survived by her husband Bill Sugden, a virologist at UW-Madison, her son Arthur Sugden, and her daughter-in-law Lauren Sugden. Donata inspired Arthur to earn a Ph.D. in neuroscience, and they collaborated on several studies. Besides her loving family, Donata’s influence on the professional careers of countless colleagues stands as a legacy to her life and career.

Check out the ARO July Newsletter!