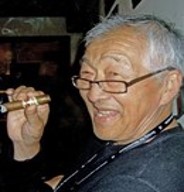 Shigeyuki “Shig” Kuwada, 76, of West Hartford, passed peacefully on Friday, May 3, 2019 at home after a courageous battle with cancer. He was born in Tashme, British Columbia in a Japanese internment camp on October 29, 1942 to Hisao “Henry” and Toki Kuwada. His three sisters, Atsumi, Naomi and Terumi were guiding forces throughout his life. Shig grew up in Winnipeg, Manitoba where he met Blanche, his wife of over 51 years. After earning his Ph.D, he spent the early formative years of his career at the University of Wisconsin. He settled in Connecticut where he and Blanche raised their three sons Tim, Jud, and Clinton “Casey” and was a distinguished Professor at the UConn School of Medicine in the field of auditory physiology.

He was known for his laid back style and laugh, but also for his exacting work ethic, unwavering principle and brutal honesty. Shig loved his daughter in-laws Karen and Rachel and his grandchildren Maddie, Stella, Lucy, Tyler, Caden, Leah, Peyton and Tucker. Shig had a thirst for knowledge and was a student of life. He was a “jack of all trades” with an impressive range of knowledge and talents. He was usually right, but never in doubt! A master fine woodworker, his innumerable masterpieces decorate the homes of family and friends around the world. Shig will be remembered for his Ramen noodles and love for his family, cigars, drums and poker. The family would like to thank Dr. Timothy Hong, Tiffany Wood, RN and the Hospice team for their excellent and compassionate care. In lieu of flowers, donations can be made to The American Cancer Society and Hartford HealthCare at Home Hospice Care.

Published in Hartford Courant on May 11, 2019.
New Member? Join Now

Poster/Podium submissions, Travel Award applications, & Award Nominations are open! The deadline to submit for all is October 1, 2021

Hearing loss can significantly disrupt the ability of children to become mainstreamed in educational environments that emphasize spoken language as a primary means of communication. Similarly, adults who lose their hearing after communicating using spoken language have numerous challenges understanding speech and integrating into social situations. These challenges are particularly significant in noisy situations, where multiple sound sources often arrive at the ears from various directions. Intervention with hearing aids and/or cochlear implants (CIs) has proven to be highly successful for restoring some aspects of communication, including speech understanding and language acquisition. However, there is also typically a notable gap in outcomes relative to normal-hearing listeners. Importantly, auditory abilities operate in the context of how hearing integrates with other senses. Notably, the visual system is tightly couples to the auditory system. Vision is known to impact auditory perception and neural mechanisms in vision and audition are tightly coupled, thus, in order to understand how we hear and how CIs affect auditory perception we must consider the integrative effects across these senses.

We start with Rebecca Alexander, a compelling public speaker who has been living with Usher’s Syndrome, a genetic disorder found in tens of thousands of people, causing both deafness and blindness in humans. Ms. Alexander will be introduced by Dr. Jeffrey Holt, who studies gene therapy strategies for hearing restoration. The symposium then highlights the work of scientists working across these areas. Here we integrate psychophysics, clinical research, and biological approaches, aiming to gain a coherent understanding of how we might ultimately improve outcomes in patients. Drs. Susana Martinez-Conde and Stephen Macknik are new to the ARO community, and will discuss neurobiology of the visual system as it relates to visual prostheses. Dr. Jennifer Groh’s work will then discuss multi-sensory processing and how it is that vision helps us hear. Having set the stage for thinking about the role of vision in a multisensory auditory world, we will hear from experts in the area of cochlear implants. Dr. René H Gifford will discuss recent work on electric-acoustic integration in children and adults, and Dr. Sharon Cushing will discuss her work as a clinician on 3-D auditory and vestibular effects. Dr. Matthew Winn will talk about cognitive load and listening effort using pupillometry, and we will end with Dr. Rob Shepherd’s discussion of current work and future possibilities involving biological treatments and neural prostheses. Together, these presentations are designed to provide a broad and interdisciplinary view of the impact of sensory restoration in hearing, vision and balance, and the potential for future approaches for improving the lives of patients. 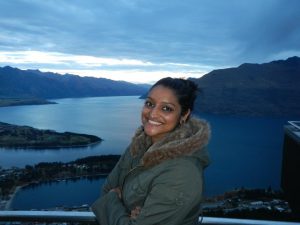 Kirupa Suthakar, PhD - Dr Kirupa Suthakar is a postdoctoral fellow at NIH/NIDCD, having formerly trained as a postdoctoral fellow at Massachusetts Eye and Ear/Harvard Medical School and doctoral student at Garvan Institute of Medical Research/UNSW Australia.  Kirupa's interest in the mind and particular fascination by how we are able to perceive the world around us led her to pursue a research career in auditory neuroscience.  To date, Kirupa's research has broadly focused on neurons within the auditory efferent circuit, which allow the brain to modulate incoming sound signals at the ear.  Kirupa is active member of the spARO community, serving as the Chair Elect for 2021. 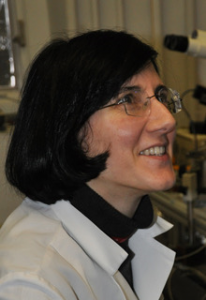 My research focuses on characterizing the biophysics of synaptic transmission between hair cells and primary afferents in the vestibular system. For many years an outstanding question in vestibular physiology was how the transduction current in the type I hair cell was sufficient, in the face of large conductances on at rest, to depolarize it to potentials necessary for conventional synaptic transmission with its unique afferent calyx.

In collaboration with Dr. Art, I overcame the technical challenges of simultaneously recording from type I hair cells and their enveloping calyx afferent to investigate this question. I was able to show that with depolarization of either hair cell or afferent, potassium ions accumulating in the cleft depolarize the synaptic partner. Conclusions from these studies are that due to the extended apposition between type I hair cell and its afferent, there are three modes of communication across the synapse. The slowest mode of transmission reflects the dynamic changes in potassium ion concentration in the cleft which follow the integral of the ongoing hair cell transduction current. The intermediate mode of transmission is indirectly a result of this potassium elevation which serves as the mechanism by which the hair cell potential is depolarized to levels necessary for calcium influx and the vesicle fusion typical of glutamatergic quanta. This increase in potassium concentration also depolarizes the afferent to potentials that allow the quantal EPSPs to trigger action potentials. The third and most rapid mode of transmission like the slow mode of transmission is bidirectional, and a current flowing out of either hair cell or afferent into the synaptic cleft will divide between a fraction flowing out into the bath, and a fraction flowing across the cleft into its synaptic partner.

The technical achievement of the dual electrode approach has enabled us to identify new facets of vestibular end organ synaptic physiology that in turn raise new questions and challenges for our field. I look forward with great excitement to the next chapter in my scientific story. 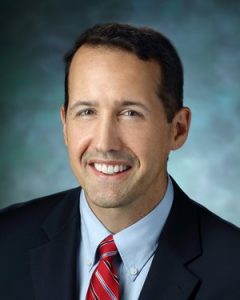 As a practicing neurotologic surgeon, Dr. Della Santina specializes in treatment of middle ear, inner ear and auditory/vestibular nerve disorders. His clinical interests include restoration of hearing via cochlear implantation and management of patients who suffer from vestibular disorders, with a particular focus on helping individuals disabled by chronic postural instability and unsteady vision after bilateral loss of vestibular sensation. His laboratory’s research centers on basic and applied research supporting development of vestibular implants, which are medical devices intended to partially restore inner ear sensation of head movement. In addition to that work, his >90 publications include studies characterizing inner ear physiology and anatomy; describing novel clinical tests of vestibular function; and clarifying the effects of cochlear implantation, vestibular implantation, superior canal dehiscence syndrome and intratympanic gentamicin therapy on the inner ear and central nervous system.  Dr. Della Santina is also the founder and CEO/Chief Scientific Officer of Labyrinth Devices LLC, a company dedicated to bringing novel vestibular testing and implant technology into routine clinical care.

Andrew Griffith received his MD and PhD in Molecular Biophysics and Biochemistry from Yale University in 1992. He completed his general surgery internship and a residency in Otolaryngology-Head and Neck Surgery at the University of Michigan in 1998. He also completed a postdoctoral research fellowship in the Department of Human Genetics as part of his training at the University of Michigan. In 1998, he joined the Division of Intramural Research (DIR) in the National Institute on Deafness and Other Communication Disorders (NIDCD). He served as a senior investigator, the chief of the Molecular Biology and Genetics Section, the chief of the Otolaryngology Branch, and the director of the DIR, as well as the deputy director for Intramural Clinical Research across the NIH Intramural Research Program. His research program identifies and characterizes molecular and cellular mechanisms of normal and disordered hearing and balance in humans and mouse models. Two primary interests of his program have been hearing loss associated with enlargement of the vestibular aqueduct, and the function of TMC genes and proteins. The latter work lead to the discovery that the deafness gene product TMC1 is a component of the hair cell sensory transduction channel. Since July of 2020, he has served as the Senior Associate Dean of Research and a Professor of Otolaryngology and Physiology in the College of Medicine at the University of Tennessee Health Science Center.

Gwenaëlle S. G. Géléoc obtained a PhD in Sensory Neurobiology from the University of Sciences in Montpellier (France) in 1996. She performed part of her PhD training at the University of Sussex, UK where she characterized sensory transduction in vestibular hair cells and a performed a comparative study between vestibular and cochlear hair cells. Gwenaelle continued her training as an electrophysiologist at University College London studying outer hair cell motility and at Harvard Medical School studying modulation of mechanotransduction in vestibular hair cells. As an independent investigator at the University of Virginia, she expanded this work and characterized the developmental acquisition of sensory transduction in mouse vestibular hair cells, the developmental acquisition of voltage-sensitive conductances in vestibular hair cells and the tonotopic gradient in the acquisition of sensory transduction in the mouse cochlea. This work along with quantitative spatio-temporal studies performed on several hair cell mechanotransduction candidates lead her to TMC1 and 2 and long-term collaborations with Andrew Griffith and Jeff Holt. Dr. Géléoc is currently Assistant Professor of Otolaryngology, at Boston Children’s Hospital where she continues to study molecular players involved in the development and function of hair cells of the inner ear and develops new therapies for the treatment of deafness and balance, with a particular focus on Usher syndrome.

Jeff Holt earned a doctorate from the Department of Physiology at the University of Rochester in 1995 for his studies of inward rectifier potassium channels in saccular hair cells.  He went on to a post-doctoral position in the Neurobiology Department at Harvard Medical School and the Howard Hughes Medical Institute, where he characterized sensory transduction and adaptation in hair cells and developed a viral vector system to transfect cultured hair cells.  Dr. Holt’s first faculty position was in the Neuroscience Department at the University of Virginia.  In 2011 the lab moved to Boston Children’s Hospital / Harvard Medical School.  Dr. Holt is currently a Professor in the Departments of Otolaryngology and Neurology in the F.M. Kirby Neurobiology Center.  Dr. Holt and his team have been studying sensory transduction in auditory and vestibular hair cells over the past 20 years, with particular focus on TMC1 and TMC2 over the past 12 years.  This work lead to the discovery that TMC1 forms the hair cell transduction channel.  His work also focuses on development gene therapy strategies for genetic hearing loss.​